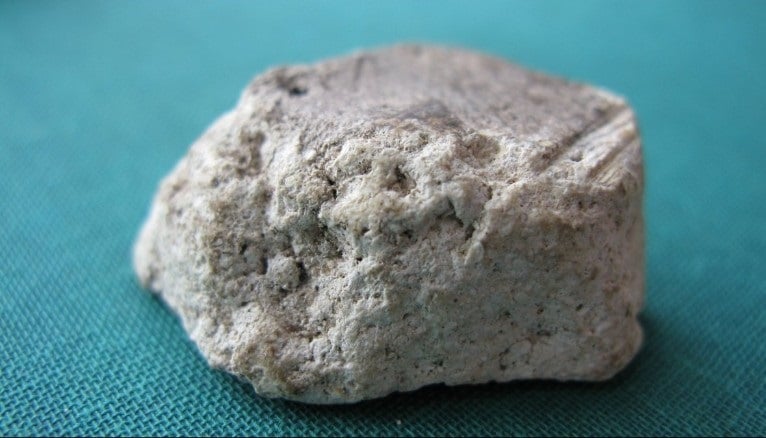 A.
The name ambergris is derived from the Spanish “ambar gris”, ambar meaning amber and gris meaning grey, thus the name signifies grey amber. The use of ambergris in Europe is now entirely confined to perfumery-as a material of perfumery. Its high price varies from $15 to $25 an ounce, though it formerly occupied an inconsiderable place in medicine. Ambergris was also decorated and worn as jewelry, particularly during the Renaissance．It occupies a very important place in the perfumery of the East, and there it is also used in pharmacy and as a flavouring material in cookery.

B.
Amber, however, is quite a different substance from ambergris and this discrepancy has puzzled some people. Amber is the fossilized resin from trees that was quite familiar to Europeans long before the discovery of the New World, and prized for jewelry. Although considered a gem, amber is a hard, transparent and wholly-organic material derived from the resin of extinct species of trees. In the dense forests of the Middle Cretaceous and Tertiary periods, between 10 and 100 million years ago, these resin-bearing trees fell and were carried by rivers to coastal regions. There, the trees and their resins became covered with sediment, and over millions of years the resin hardened into amber.

C.Ambergris and amber are related by the fact that both wash up on beaches. Ambergris is a solid, waxy and flammable substance of a dull grey or blackish color, with the shades being variegated like marble. It possesses a peculiar sweet，earthy odour not unlike isopropyl alcohol. It is now known to be a morbid secretion formed in the intestines of the sperm whale, found in the Atlantic and Pacific oceans. Being a very lightweight material, ambergris is found floating upon the sea, on the sea coast, or in the sand near the sea coast．It is met with in the Atlantic Ocean, on the coasts Of Brazil and Madagascar; also on the coast Of Africa, of the East Indies, China, Japan, and the Molucca Islands; but most of the ambergris which is brought to England comes from the Bahama Islands. It is also sometimes found in the abdomen of whales; it is always in lumps in various shapes and sizes, weighing from 1/ 2 oz. to 100 or more lb. A piece which the Dutch East India Company bought from the King of Tyre weighed 182 lb. An American fisherman from Antigua found, Inside a whale, about 52 leagues south-east from the Windward Islands, a piece of ambergris which weighed about l 30 lb, and sold for 500 sterling.

D.
Like many other substances regarding the origin of which there existed some obscurity or mystery, ambergris in former times possessed a value, and had properties attributed to it, more on account of the source from which it was drawn than from its inherent qualities. Many ridiculous hypotheses were started to account for its origin, and among others it was conjectured to be the solidified form of the sea, a fungus growth in the ocean similar to the fungi which form on trees.

E.
The true source and character of ambergris was first satisfactorily established by Dr. Swediaur in a communication to the Royal Society. It was found by Dr. Swediaur that ambergris very frequently contained the horny mandibles or beaks of the squid, on which the sperm whales are known to feed. That observation, in connection with the fact of ambergris being frequently taken from the intestines of the sperm whale, sufficiently proved that the substance is produced by the whale’s intestine as a means of facilitating the passage of undigested hard, sharp beaks of squid that the whale has eaten. ieltsxpress

It was further observed that the whales in which ambergris was found were either dead or much wasted and evidently in a sickly condition. From this it was inferred that ambergris is in some way connected with a morbid condition of the sperm whale. Often expelled by vomiting, ambergris floats in chunks on the water and is of a deep grey colour, soft consistency, and an offensive, disagreeable smell. Following months to years of photo-degradation and oxidation in the ocean, this precursor gradually hardens, developing a dark grey or black colour, a crusty and waxy texture, and a peculiar odour that is at once sweet, earthy, marine, and animalist. Its smell has been described by many as a vastly richer and smoother version of isopropanol without its stinging harshness.

In that condition its specific gravity ranges from 0.780 to 0.926. It melts at a temperature of about 145 F into a fatty yellow resin-like liquid．It is soluble in ether, volatile and fixed oils, but only feebly acted on by acids. By digesting in hot alcohol, a peculiar substance termed ambrein is obtained. In chemical constitution ambrein very closely resembles cholesterin, a principle found abundantly in biliary calculi . It is therefore more than probable that ambergris, from the position in which it is found and its chemical constitution, is a biliary concretion analogous to what is formed in other mammals.

The industries founded on ambergris resulted in the slaughter of sperm whales almost to extinction. Sperm whales were killed in two massive hunts, the Moby Dick whalers who worked mainly between 1740-1880, and the modem whalers whose operations peaked in 1964, when 29,255 were killed. Most recent estimates suggest a global population of about 360,000 animals down from about 1,100,000 before whaling. In the 20th century, 90% of ambergris was derived in the process of killing sperm whales. To this day, ambergris is still the most expensive product in the whole body of a sperm whale. Depending on its quality, raw ambergris fetches approximately 20 USD per gram. In the United States, possession of any part of an endangered species-including ambergris that has washed ashore-is a violation of the Endangered Species Act of 1978.

Historically, the primary commercial use of ambergris has been in fragrance chemistry. However, it is difficult to get a consistent and reliable supply of high quality ambergris. Due to demand for ambergris and its high price, replacement compounds have been sought out by the fragrance industry and chemically synthesized. The most important of these is Ambrox, which has taken its place as the most widely used amber odorant in perfume manufacture. Procedures for the microbial production of Ambrox have also been devised.

Questions 1-5
The reading passage “Ambergris” consists of nine sections, A – I
Classify the following information as referring to

A. ambergris only
B. amber only
C. both ambergris and amber [ieltsxpress]
D. neither ambergris nor amber

Questions 6-9
Complete the sentences below with NO MORE THAN ONE WORD from the passage.
Write your answers in boxes 6-9 on your answer sheet.

Questions 10-13
Do the following statements agree with the information given in Reading Passage 1?
In boxes 10-13 on your answer sheet, write

10 In the 20th century, most ambergris was made in the process of killing sperm whales.
11 Ambergris is becoming more expensive than before.
12 Ambergris still remains in the perfume making.
13 Ambergris is still the most frequently used ingredient in perfume production today.

Supporting Sentence: Its high price varies from $15 to $25 an ounce
Keywords: very expensive
Keyword Location: Paragraph A, Line 3
Explanation: High price could be interpreted as very expensive from the text. Furthermore, the next paragraph does not contain any information indicating that amber has a high price. The answer must be A.

Supporting Sentence: … as a flavoring material in cooking.
Keywords: food flavor
Keyword Location: Paragraph A, Last Line
Explanation: Food flavour could be interpreted as very pricey from the wording. We couldn’t discover any material on ambergris being used as a food flavour, either, so the answer must be A.

Supporting Sentence: elimination method
Keywords: currency
Keyword Location: The word currency is not found in the entire passage. So it does not relate to either of them.
Explanation: There is no usage of currency in the passage.

Question 4: referred to in a communication

Question 5: could be seen through

Supporting Sentence: It was found by Dr Swediaur that ambergris very frequently contained the horny mandibles or beaks of the squid, on which the sperm whales are known to feed.
Keywords: sperm whale, eats, hard and sharp, squid
Keyword Location: Paragraph E, Line 2
Explanation: We may conclude from the question that the solution must be a Noun, a hard and sharp component of a squid. Furthermore, the line “It was discovered by…. on which sperm whales are known to eat” contains all of the keywords mentioned above. As a result, the solution must be contained within this statement. As a result, the response must be a Noun, a squid part that is hard and pointy and belongs in the sentence above beaks should be the proper answer to this question.

Supporting Sentence: the substance is produced by the whale’s intestine as a means of facilitating the passage of undigested hard, sharp beaks of squid that the whale has eaten.
Keywords: intestine, produce, ambergris, facilitate
Keyword Location: Paragraph E, Line 3
Explanation: The response must be a Noun, which is the object of the verb facilitate, based on the question. Because the last sentence in this paragraph has all of the keywords stated above, the answer, the object of the verb assist, should appear somewhere in this sentence, implying that this passage is the correct response to this question.

Supporting Sentence: connected with a morbid condition of the sperm whale. Often expelled by vomiting, ambergris floats in chunks on the water …
Keywords: sperm whale, float
Keyword Location: Paragraph F, Line 3 IELTSXpress
Explanation: We may assume from the question that the response must be a Verb, which is done by sperm whales and forms into a phrasal verb with up. It’s also self-evident that this verb should be in the passive voice. Take this section of the paragraph: “…connected with a morbid condition… ambergris floats in chunks on the water…” From this section, we choose two verbs: expel and vomit; expel up is not a suitable phrasal verb. On the other hand, while vomiting is a proper phrasal verb, it would also be incorrect because the answer must be a verb in its passive form. Thus vomiting should be the correct answer to this question.

Supporting Sentence: Following months to years of photo-degradation and oxidation in the ocean, this precursor gradually hardens, developing a dark grey or black colour
Keywords: months of exposure on air, it, the colour turns dark grey or black
Keyword Location: Paragraph F, Line 4
Explanation: We may draw from the question that the answers must be a singular Verb that depicts the state of ambergris after months of air exposure. Consider the following phrase: “Following months to years of photo-degradation and oxidation… It contains all of the keywords given above, therefore the solution (a Verb) might be hardened is our correct answer.

Question 10. In the 20th century, most ambergris was made in the process of killing sperm whales.

Supporting Sentence: In the 20th century, 90% of ambergris was derived in the processing of killing sperm whales.
Keywords: 2oth century, most ambergris, made, the process of killing sperm whale
Keyword Location: Paragraph H, Line 3
Explanation: Inferring from the details in the fourth sentence of the paragraph, the question statement is validated in the passage, the answer is TRUE.

Question 13. Ambergris is still the most important amber odorant in perfume manufacture.