The chart below shows the global sales (in billions of dollars) of different kinds of digital games from 2000 to 2006. 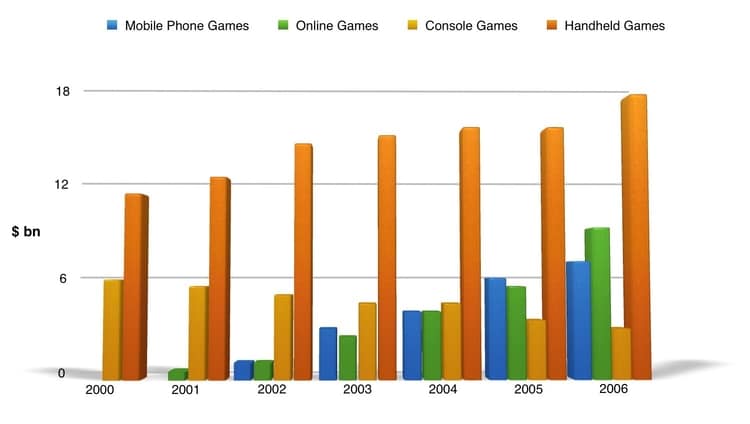 The given illustration provided data on the sales amount of four different types of digital games from the year 2000 to 2006. The digital game categories are mobile phone games, online games, console games and handheld games. The amount of sales is given in billions of dollars. Overall, the handheld games sales amount was much higher than other types of games’ sales.

Overall, it can be visible that handheld games accounted upward trend throughout the time period. Whereas, Console games recorded downward trend in given time period.

The bar chart compares the sales figures of four different types of gaming platforms (mobile phones, online, console, and handheld) sold worldwide from 2000 to 2006. The values are given in billion dollars.

Overall, handheld games were always the market leader with a turnover of at least twice as high as the second best-selling category of the year. Console games, however, continued losing their share of the market each year, whereas the figures for the other two categories continued to rise.

Regarding handheld and console games, the former were the market leader with sales reaching just under $12 billion in the year 2000, while the corresponding figure for the latter was approximately half that amount. Over the next six years, sales of handheld games experienced a gradual increase and eventually stood at around $18 billion. However, those of console games declined over the same period and reached their lowest level (approximately $3 billion) in 2006. IE LT S X PRE S S

Turning to online and mobile phone games, we can see that they weren’t very popular when they were introduced to markets (in 2001 and 2002 respectively) since their initial figures were under $3 billion. Nevertheless, both experienced a continual increase in their sales figures over the subsequent years. In 2006, the former became the second best-selling type of game with a turnover of around $9 billion, and the latter came next at about $7 billion.

The bar chart illustrates the global sales of mobile phone games, online games, console games and handheld games from 2000 to 2006. The measurement is done in billions of dollars.

Overall, it can be seen that from the initial year till the last the sale of handheld games remained high among these games. Mobile phone games, online games, and handheld games experienced an upward trend whereas console games showed a downward trend.

The bar graph compares the worldwide turnover for four kinds of electronic games for a period of seven years, starting from 2000 to 2006. Overall, it can be observed that sales for most of the digital games experienced an upward trend, except for console games. Handheld games had by far the highest number of sales throughout this period.

Global sales for online games and mobile phone games followed a similar pattern with both sales numbers went up considerably for the first 6 years. By the seventh year, sales revenues for both types of games were over 6 billion dollars.

Overall, handheld games contributed the most and had a steady increase throughout. The figures for console games kept reducing whereas that of online and mobile games continued to grow from their inception in 2001 and 2002 respectively, to the end of the period. ieltsxpress.com

With regards to handheld games, the initial figure was about $11billion in 2000 and saw a continuous growth until 2004 where sales reached approximately $16billion. This amount remained stable the following year before experiencing a rise to $18billion at the end of the period. Similarly, the amounts earned from online and mobile phone games were the same in 2002, being around $1billion, and in 2004, a growth of both to close to $4billion. Although money gotten from playing games on cell phones had surpassed that gotten from online games in years 2003 and 2006, there was a reversal at the end of the period where online games income overtook that of phone gaming at nearly $2billion.

Revenue from console games in the year 2000 stood at $6billion, over half of that of handheld games in the same year. However, the subsequent years witnessed a gradual decline until 2003 where it levelled off in the next year, yet afterwards continued its fall into 2006 where sales generated only amounted to about $3billion- a 50% reduction of the initial figure.

The graph chart illustrates the global sales of different types of digital games between 2000 and 2006. The data are depicted in billions of dollars. Overall, mobile phones, handheld and online games show highest sales in the year 2006 except the console games.

To begin with, online games sales increased steadily from the year 2001 to 2006 with depicts highest sales around 8 billion dollars in 2006. On the other hand, console games selling are fluctuating in the period of six years. Mobile phones and online games show no sales in the year 2000, while mobile phone games still continued to have zero sales in 2001. ieltsxpress.com

All four games together sales begin in last four periods. Console games show almost the same sales of around 5 billion dollars in the first two years of time. Similarly, handheld games show steady sales in the years 2004 and 2005 with approximately 15 billion dollars.

Overall, handheld games are leading in global sales in the period of six years, with the highest sales of 17 billion dollars in 2006.