There are two major subdivision of surfing: longboarding and shortboarding. Their respective names represent differences in the type of surfboard used. Longboards are, as the name suggests, much longer and require a different riding style to shortboards.

Surfboards were originally made of solid wood, and were large and cumbersome, often weighing in excess of 100 pounds. Nowadays, they are more commonly constructed out of polyurethane foam making them much lighter, which means better manoeuvrability for the boarder. This is especially beneficial for longboarders, whose boards can measure up to 3 metres in length.

Successful longboarders must learn to carry out difficult walking manoeuvres up and down the board so as to set themselves in the optimal position for catching and riding the wave. The lighter the board, the easier it becomes to execute such manoeuvres. Shortboarders, whose boards are usually between 1.8 and 2 metres long, also benefit from greater manoeuvrability though and are able to turn and adjust more quickly thanks to the lighter boards.

It is claimed that surfing was first observed being enjoyed by native Tahitians in 1767 by European explorers. Later travellers also reported seeing naked locals, both men and women, amusing themselves in the surf off the coast of Hawaii. Perhaps this is one of the reasons why the sport is synonymous with the South Pacific and Hawaii in particular. Today, however, the popularity of surfing is such that surf clubs have popped up almost everywhere, from the windy West Coast of Ireland to the ultrachic Californian beaches. Indeed, it is in Northern California where perhaps the most famous and glamorous surfing takes place.

The prospective surfer would be well-advised to consider the dangers associated with the sport before he takes to the waves. Like all water sports, surfing carries with it the inherent danger of drowning. Although the board itself offers buoyancy, it can also be a hindrance, and a deadly one at that if its leash becomes entangled in a reef, holding the surfer underwater. Ideal water conditions for surfing can be extremely demanding on the body, too, and require the surfer to be an extremely competent swimmer.

Collisions with sandbanks, reefs, surfboards and other surfers can also be extremely hazardous and can lead to concussion – a death sentence if the surfer is not rescued from the water quickly. Although rarer, attacks by marine animals are not uncommon, with sharks, rays, seals and jellyfish posing the greatest threats. You certainly need to be a courageous soul to brave the waves in this sport.

But for those who insist on giving it a go, the rewards can be very gratifying, and it isn’t too expensive to get up and running either. Surf schools in popular destinations offer multi-day beginner and intermediate courses that focus on the basic fundamentals. Five-day courses start from as little as £100 and there are all-inclusive camps, too, which cover accommodation, meals, lessons and equipment. Longboards, given their superior paddling speed and stability, are usually preferred by coaches for use with beginners.

Typically, the courses break down the technique into separate skills: the first one being how to get into position to catch a wave, the second one being how to ride the wave and not fall off. Balance, of course, plays a crucial role, so a lot of time is dedicated to balance training exercises as well.

Difficult though it may be to master the art of surfing, it can also be extremely rewarding, and there are few feelings to compare with the exhilaration of riding out your first wave. So, for those of you daredevil adrenalin junkies who fancy having a go, details of a surf club near you can be found on the British Surfing Association’s website, britsurf.co.uk.

And try to remember as your feet are dangling over the side of the board, Jaws was just a film; it ALMOST certainly won’t happen to you!

A.   often weigh more than 100 pounds today.
B.   are usually made out of solid wood.
C.   require surfers to perform difficult walking manoeuvres.
D.   are lighter and more manoeuvrable today.

A.   was invented by a group of European explorers.
B.   was first observed by native Tahitians.
C.   is commonly performed naked by both men and women.
D.   was first practised in the South Pacific.

A.   in windy coastal areas.
B.   on the fashionable west coast of Ireland.
C.   in Tahiti in recent years.
D.   all around the world.

17.   Before a novice surfer takes to the water, he should

A.   check the latest weather report.
B.   avoid big waves.
C.   have good buoyancy.
D.   be aware of the risks involved.

18.   Although a surfboard can help you stay buoyant, it can also

A.   get in the way of your safety in some cases.
B.   help you escape from dangerous sea life.
C.   be a very dangerous weapon.
D.   prevent concussion or death.

19.   Unless you are pulled from the water quickly, a bad collision can prove

Which TWO of the following are hazards that surfers face?

Which TWO of the following are true about surfing?

Questions 24-26
Write NO MORE THAN TWO WORDS AND/OR A NUMBER for each answer. 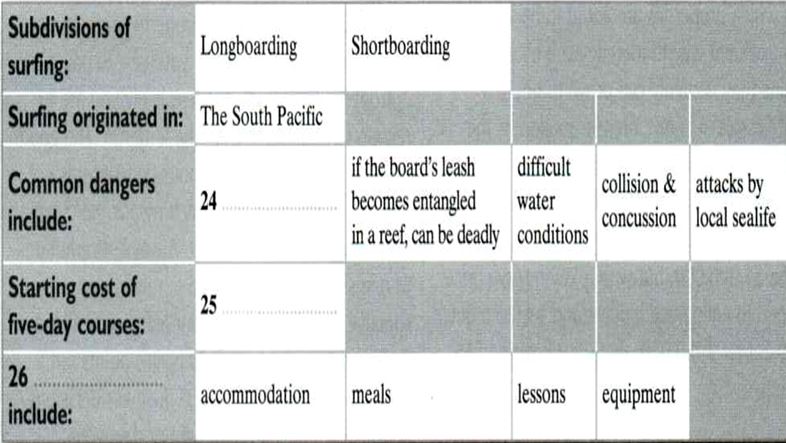