and explain why would you like to meet her.

A female leader you would like to meet – Sonia Gandhi Well, to be honest, I don’t know many female leaders. However, if I’d a chance to meet a lady leader, I’d choose a meeting with Mrs. Sonia Gandhi. Even though she belongs to Italy, she is not a resident of India after married to Indian politician. She is a former president of Indian National Congress(INC) and now forcing her son to take the change of her position.

When she was running her political party she mostly involved in the all-party meeting, rallies, and election speech. From my point of view, she is more towards politician instead of as a leader. I never watched any of her speeches in which she showed her leadership, always wanted to be in the government is what she wanted. However, before her party lost against Mr. Modi, she carried out some anthropology work for disabled people, farmers.

I’ve got a plethora of questions to ask her. First, I’d ask about why their government did not perform well for the last few decades. Another question would be related to corruptions, I will ask why they did not take actions on corruption and making people miserable. What’s more, I’d also ask about her son why he behaves like a childish though he is 45.

Overall, honestly, due to I don’t know any female leader, I choose her to meet as she is the well know female person in India. I’d love meeting her.

A female leader you would like to meet – Maneka Gandhi Females these days are playing a bigger role in business and politics. There are several countries where women are working as Heads of State. In my country also, a lot of females are venturing into politics.

A popular Indian female leader is Mrs. Maneka Gandhi. I first came to know about her while watching news on TV. She was giving an interview on animal rights and environment protection. That’s how I came to know that she was an animal rights activist, environmentalist and a politician as well. She has been a Minister in the Indian government heading Ministry of Environment as well as Ministry of Women & Child Development.

She became quite famous when she started an organization ‘People for Animals’. It is the largest organization for animal rights and welfare in India. Her popularity rose further when she started propagating, through her public interviews to adopt a healthy and active lifestyle comprising of vegan diet. She also urged people to protect the environment through lifestyle changes.

I too was impressed by the ideas she advocated through her interviews and the books she wrote. In fact, I turned into a vegetarian after being inspired by her. Another thing that I like about her is that she takes up causes related to uplifting women in our society. She introduced several policies in favor of women while she was serving as a Minister.

She is a true role model for today’s generation and I admire her for her intelligence, courage and perseverance to bring about a radical change in the Indian society.

A female leader you would like to meet – Nikki Haley 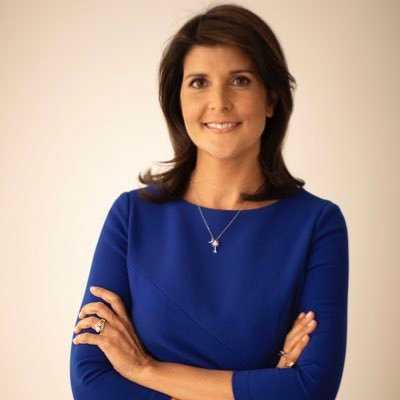 I believe that Women are a good leader in politics. So here I would like to talk about a female leader to whom I admire. Her name is Nikki Haley. She is an American political leader. I describe her briefly.

Her full name is Namrata Randhawa. She is born on January 20, 1972. She is also known as Nikki Haley, an American diplomat, and political leader. In addition to it, She has served as United States ambassador of the United Nations from 2017 to 2018.

Apart from it, As a republican, she previously served as Governor of southern California from 2011 to 2017 and three terms as a representative in the legislature.

Moreover, Haley was the first female governor of South Carolina, and the second Indiana American to serve as a governor in the United States. Also, In 2016, she was named by a famous magazine named “Time magazine” as among the 100 most influential people in the world.

She has gotten some Honors and awards during her political career. Such as Friend of the Taxpayer Award, S.C. Association of Taxpayers, 2005, Leader in Liberty Award,  in 2005, Legislator of the Year Award, Centennial Foundation, 2005, and so on.

All in all, so she is a political leader to whom I want to meet. I would like to do a conversation with her.

A female leader you would like to meet – Kiran Bedi Nowadays there are so many famous women and leaders, who are the best examples of women empowerment and many of them are my favourite. Here I would like to talk about a female leader who best represents empowerment among women.

Her name is Kiran Bedi. She is a multi-talented woman. She was born in 1949 in Punjab. She started her career as a tennis player and she participated in several national competitions and won many titles on National and state level. She also worked as teacher in Khalsa College for women in Amritsar for 2 years in politics.

After that, she started her training for Indian police services in a national training institute. She was the only woman out of 80 trainees and after the training; she became first woman IPS officer in India.

In 2007 she took voluntary retirement to work as a social activist and writer. She was the one of the main leaders in 2011 anti- corruption movement.

She also appeared in TV debate shows. Later on, she joined a political party but she could not win the election. Later on, the government posted her as lieutenant governor of Puducherry.

I like to meet her because she is an example of modern woman as she achieved her goals in the time where most of the works were done by men.

So Kiran Bedi is the female leader whom I like to meet.

What is a leader?

The leader is an individual who can think ahead of time. Who when the world is stressed over the results can make sense of an alternate method for getting things done and the person who in predicament doesn’t mishandle yet helps other people. A leader isn’t only the person who leads yet the person who unites individuals. Who encourage that it isn’t just about living alone yet being joined together and making incredible things.

Who are the first leaders who come to your mind?

Well, I don’t have that much interest in politics but I know many national and international leaders like Barack Obama, Nelson Mandela, Mahatma Gandhi, Jawaharlal Nehru, Adolf Hitler, Indira Gandhi, Margaret Thatcher. These are a portion of the leader who strikes in my mind when I hear the word chief.

What makes those people great leaders?

If you were the leader of your school, what changes would you make?

If I was the leader of the school, I think there are just a couple of things that I might want to change. One of them is punishment. I realize that punishment is an extraordinary method to teach individuals. Yet then I additionally accept that a little reward is never a terrible thing. Along these lines, in the event that one sees an individual getting punishment day by day. It may be conceivable that the person needs counseling and not simply one more punishment.

Also, there ought to be more Parent instructors meet. In this way, that guardians and instructors can stay associated all through, not exactly when the outcomes turn out.

Also Check: A Comic Actor Who is Popular in Your Country