The picture below shows Bell Hill farm in 1976 and changes that took place in 2006. 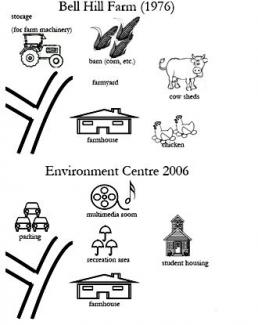 The given development charts demonstrate the changes in Bell Hill Farm that took place over a period of three decades, from 1976 to 2006.

Overall, the Bell Hill Farm was completely transformed into the Environment Centre by 2006. The only building which was left untouched is Farmhouse in the south with no changes done to it.

The most noticeable change is replacement of storage of farm machinery in the Northwest part of Bell Hill Farm with a car parking in Environment Centre 2006. Whereas, barn farm in the north was cut down and a multimedia room was established. In 2006, both cow sheds and chicken place in the eastern part of farm were demolished and a new student housing was constructed.

Apart from above, farmhouse in the south and T-shaped road in the south west were at the same location. However, farm yard in the centre of Bill Farm was removed and environment centre was constructed over the area in 2006.

The given map shows the Bell Hill farm in 1976 and the changes that took place over a period of thirty years. It can be seen that the farm was transformed into an Environment Centre by 2006.

In 1976, there was a farmyard in the centre, which was replaced by a recreational area by 2006. The barn in which corn etc. was stored in 1976 was replaced by a multimedia room in 2006. The storage for farm machinery on the northwest was converted into a car parking area. The farmhouse on the south side was not changed at all. The cow-sheds and poultry area on the east were converted into student housing. The roads on the west were also not altered and remained as they were in 1976.

Therefore, it can be seen that the Bell Hill farm of 1976 underwent a complete transformation and became an Environmental Centre over a period of three decades.

Also Check: The Three Pie Charts below Show the Coffee Production and Consumption